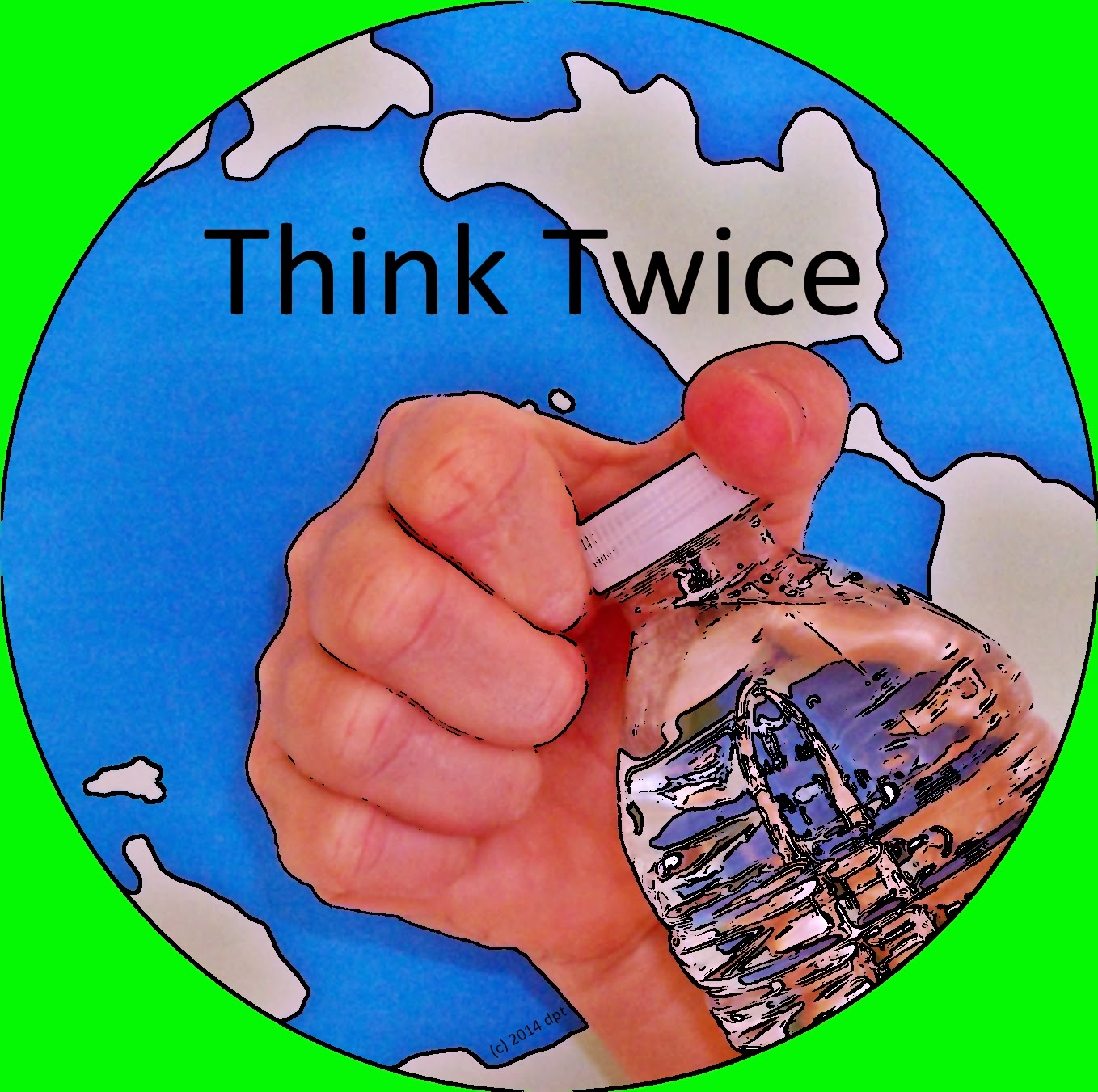 January was definitely a month full of roadblocks—in the form of mountains of snow (well, more like 4” which seems to paralyze our area. Schools are STILL closed today), the typical and A-typical winter virus that spread throughout our household (in the form of Influenza type A), and mountains of other commitments (I won’t go into that one).
Therefore, a project that is very dear to my heart has been delayed, moved to the bottom of the list, and is, sadly, incomplete with the passing of my own personal deadline—January 31.
I hope that February is the month I complete the project. In the meantime, below is a  video teaser of the project-to-come.
Posted by Rainbows2Snowflakes at 5:02 AM No comments:

We all know the weather patterns—hot in summer and cold in winter? Or, is that correct? This year alone we’ve had temperatures in the 80s with torrential rains followed by bone chilling, pipe bursting temperatures so cold that schools and businesses were closed. These extreme weather swings took place in the month of January. Climate change is more than likely the cause of our now-familiar roller coaster weather patterns.

Why not tap into these changes in weather patterns to create a snowman glyph?
Today’s post includes instructions and printables to use with your children to practice recording and interpreting data, create and interpret bar graphs, and improve fine motor skills. As an added bonus, I am including a  set of snowflake-themed printables for you to use with the kiddos. So, when the winds are howling and the snow is blowing, you can stay inside warm and snug and still enjoy the snowflakes.


HOW WOULD YOU BUILD YOUR SNOWMAN GLYPH? 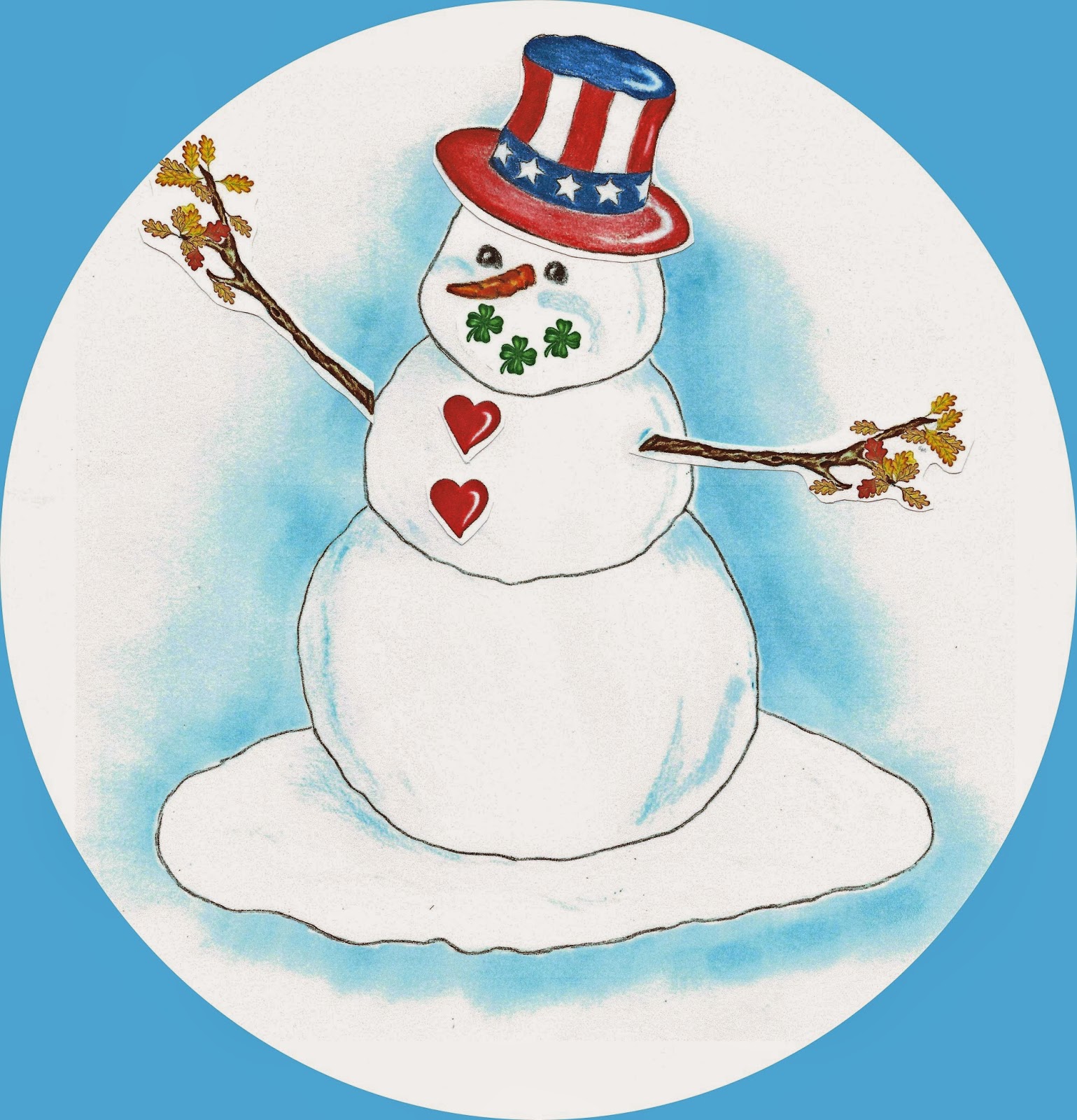 OBJECTIVE: Demonstrate the ability to read and interpret glyphs.
*Please note that younger children may need assistance with cutting the snowman components.
MATERIALS NEEDED
Printouts provided with this lesson*
Scissors and glue 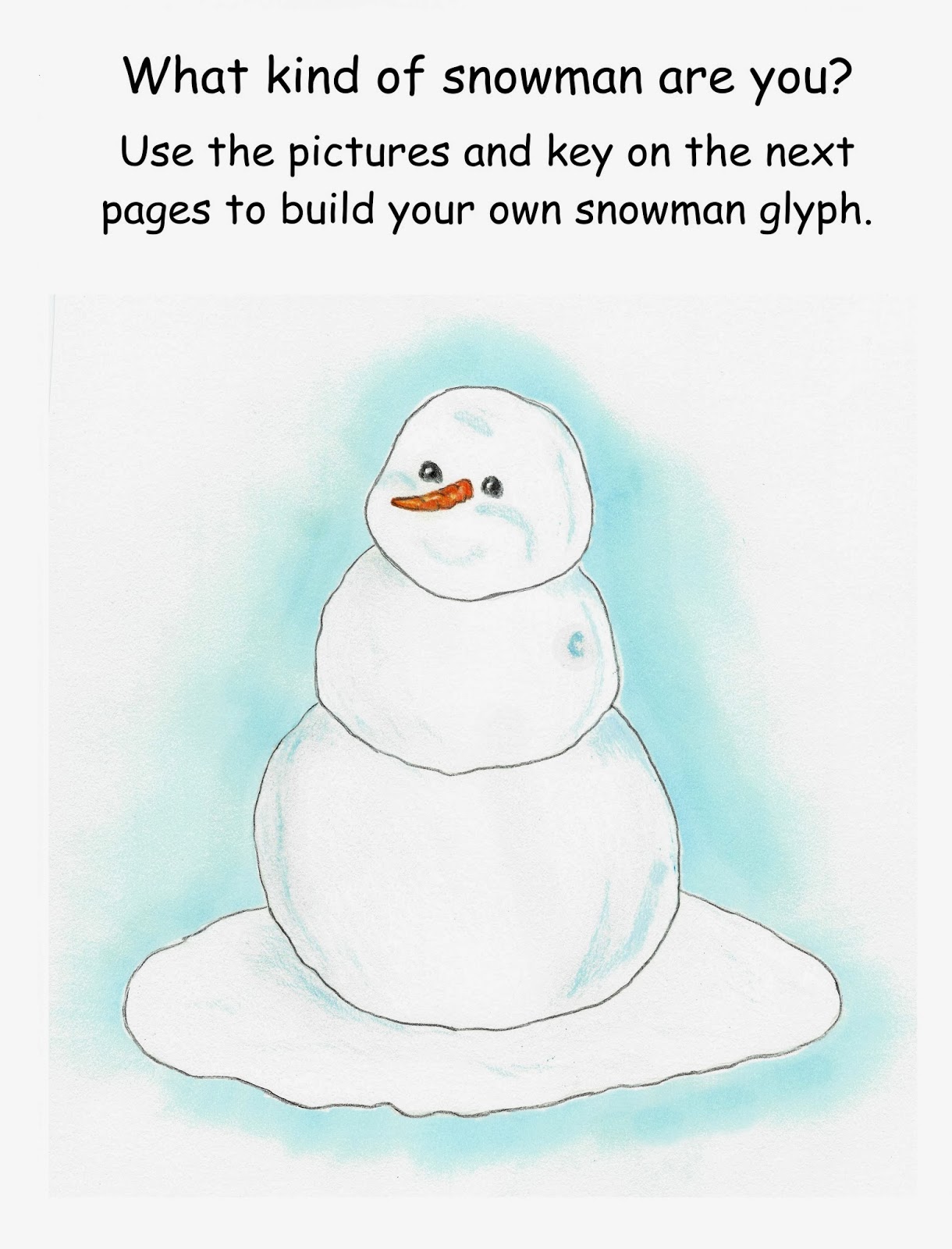 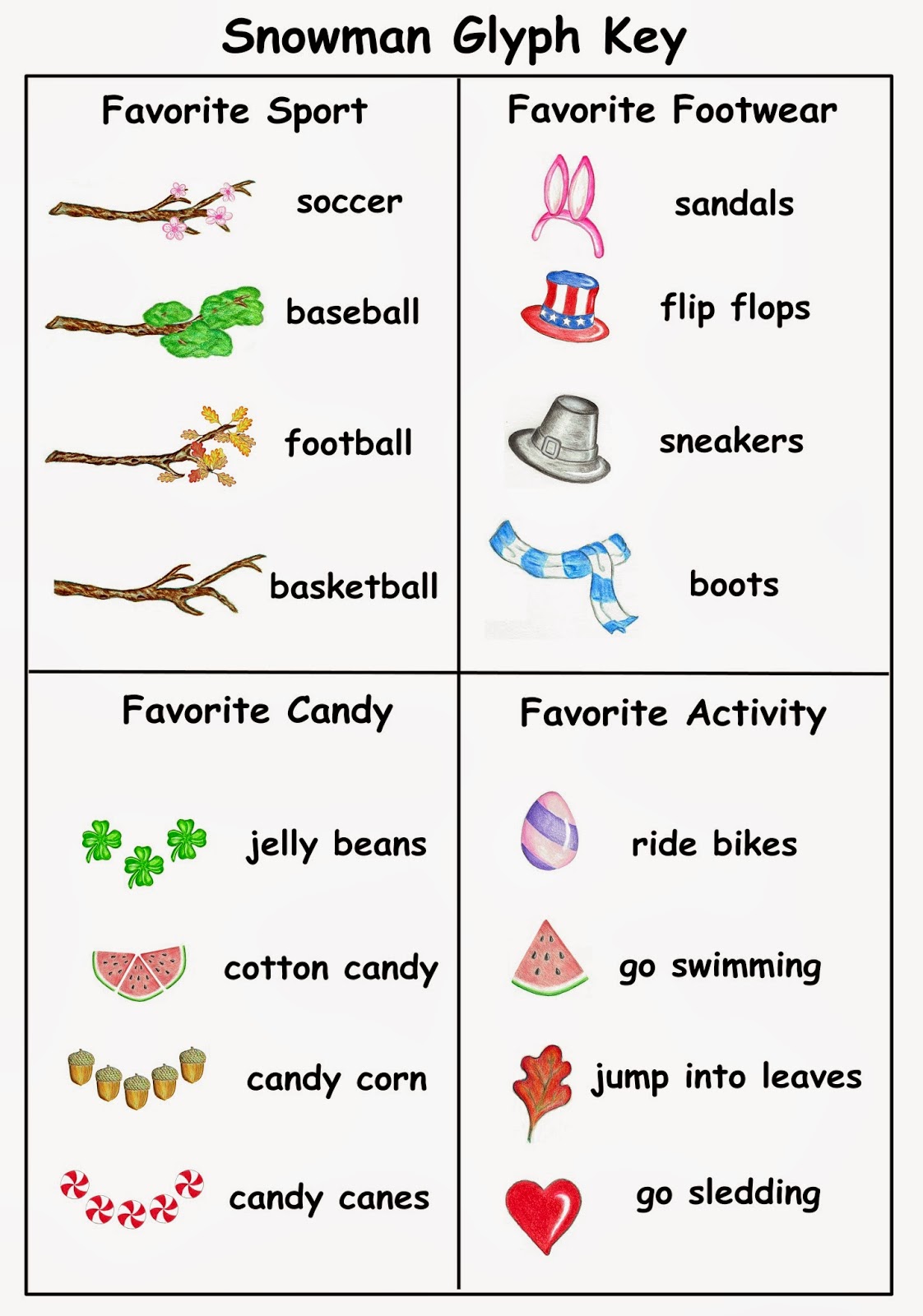 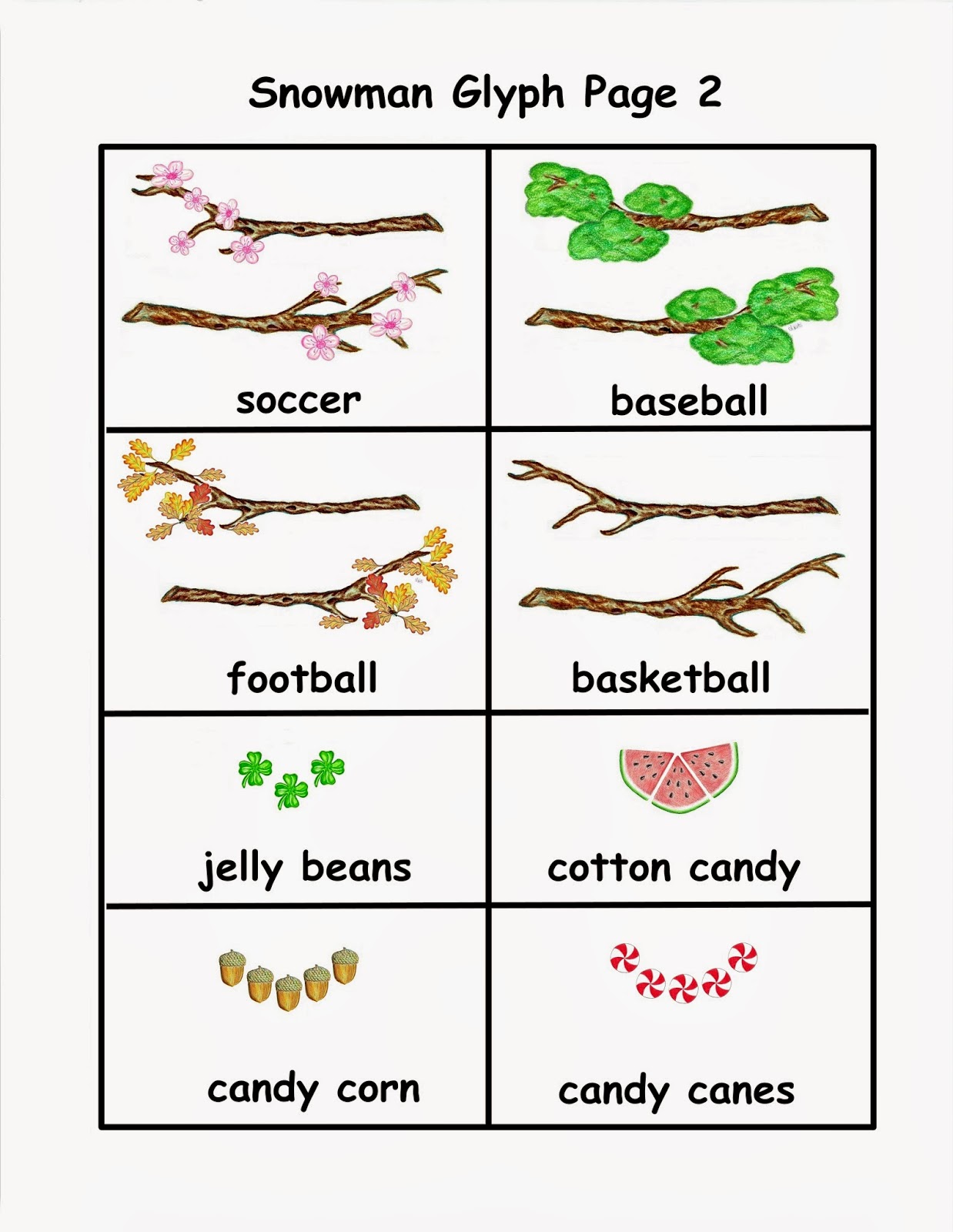 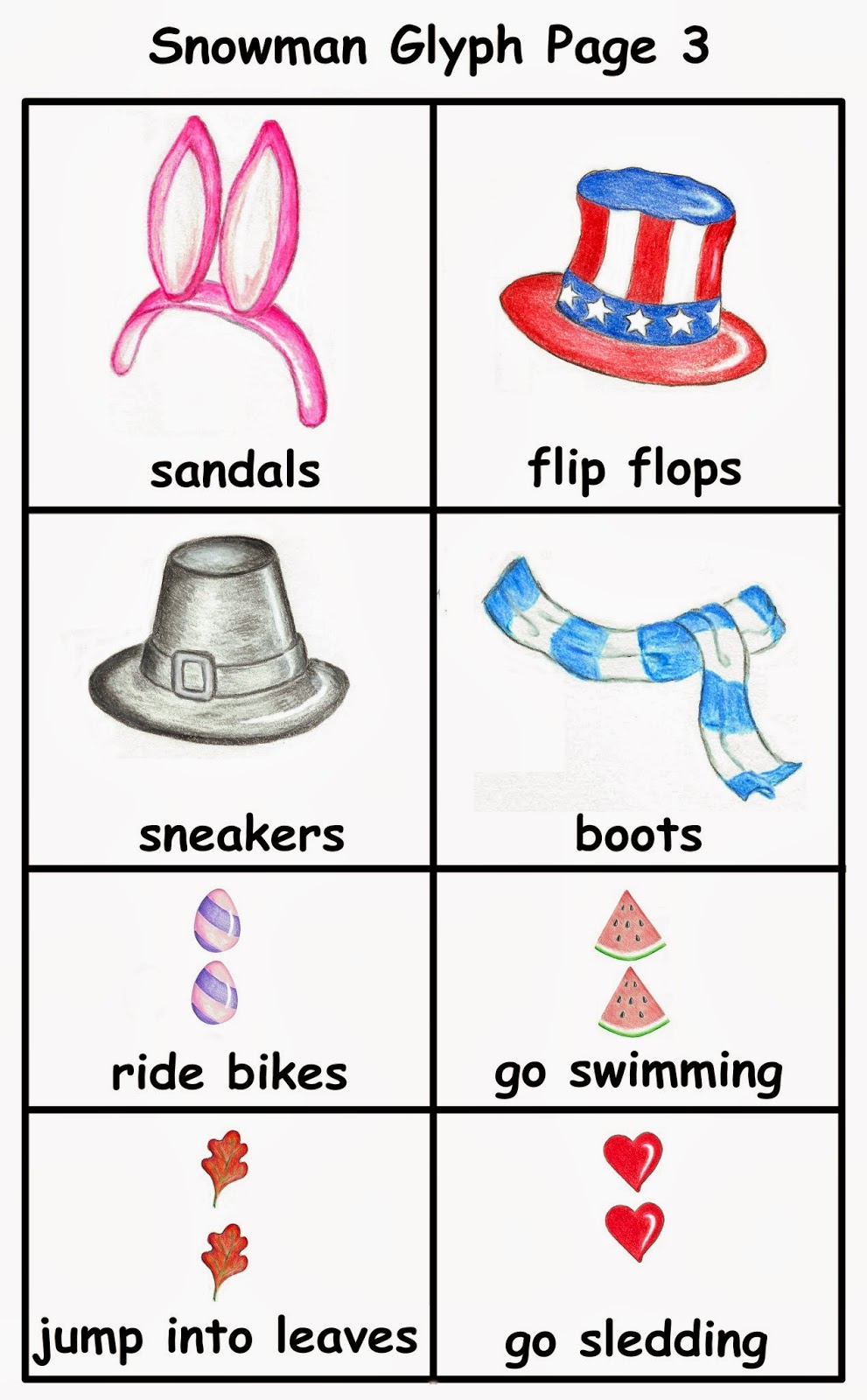 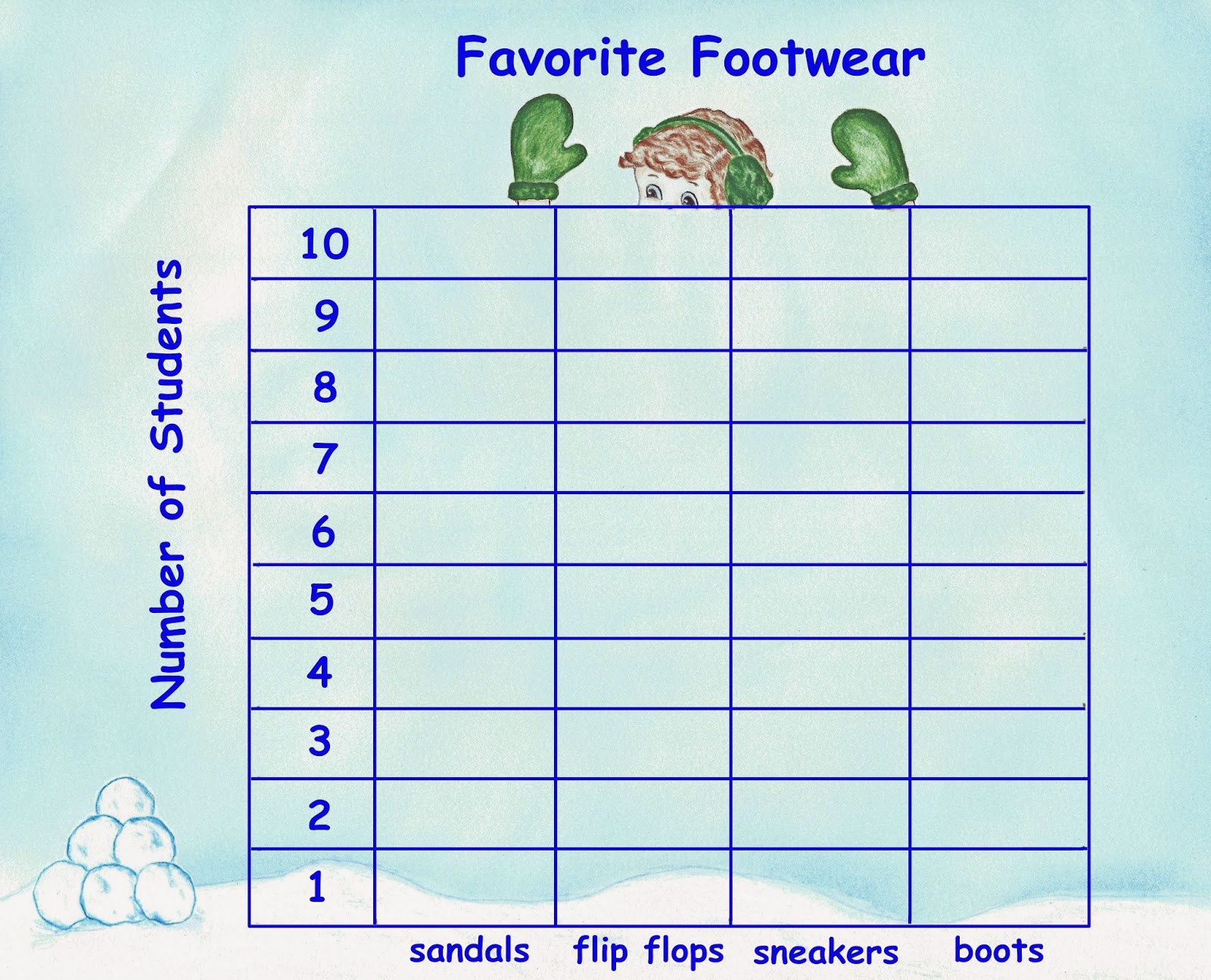 INSTRUCTIONS
1. Prior to the activity, prepare a snowman glyph with your personal choices for the snowman components. Show your completed snowman to the children, along with the key.
Ask: Looking at the snowman that I made and the key, what do you think my favorite candy is? What type of shoes do I like to wear?
Explain that the children are going to create their own snowmen, based on their favorite things.
2. Show the key to the children. Discuss the options to use for each category.
3. Give the snowman printout and the component printouts to the children, instructing them to build their own snowman based on their choices.
4. When the glyphs are completed, children will share their choices to reinforce reading the glyph with the Snowman Glyph Key.
Snowmen and a Snow Fort
Use the completed glyphs to build a bar graph showing the total number of children who chose each component, as shown.
MODIFICATION: Children create a glyph based upon their favorite season. Create a bar or pictograph of the results. 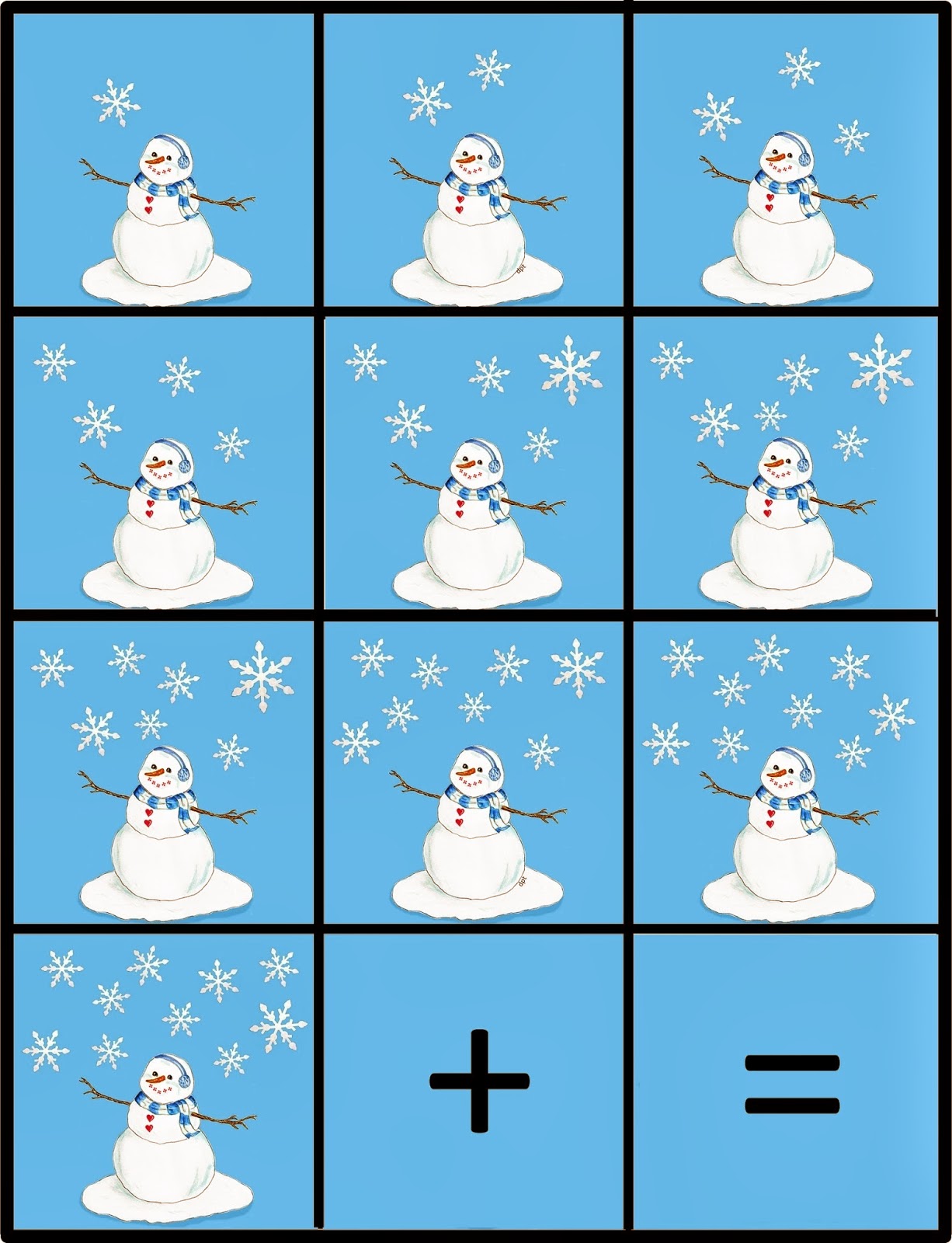 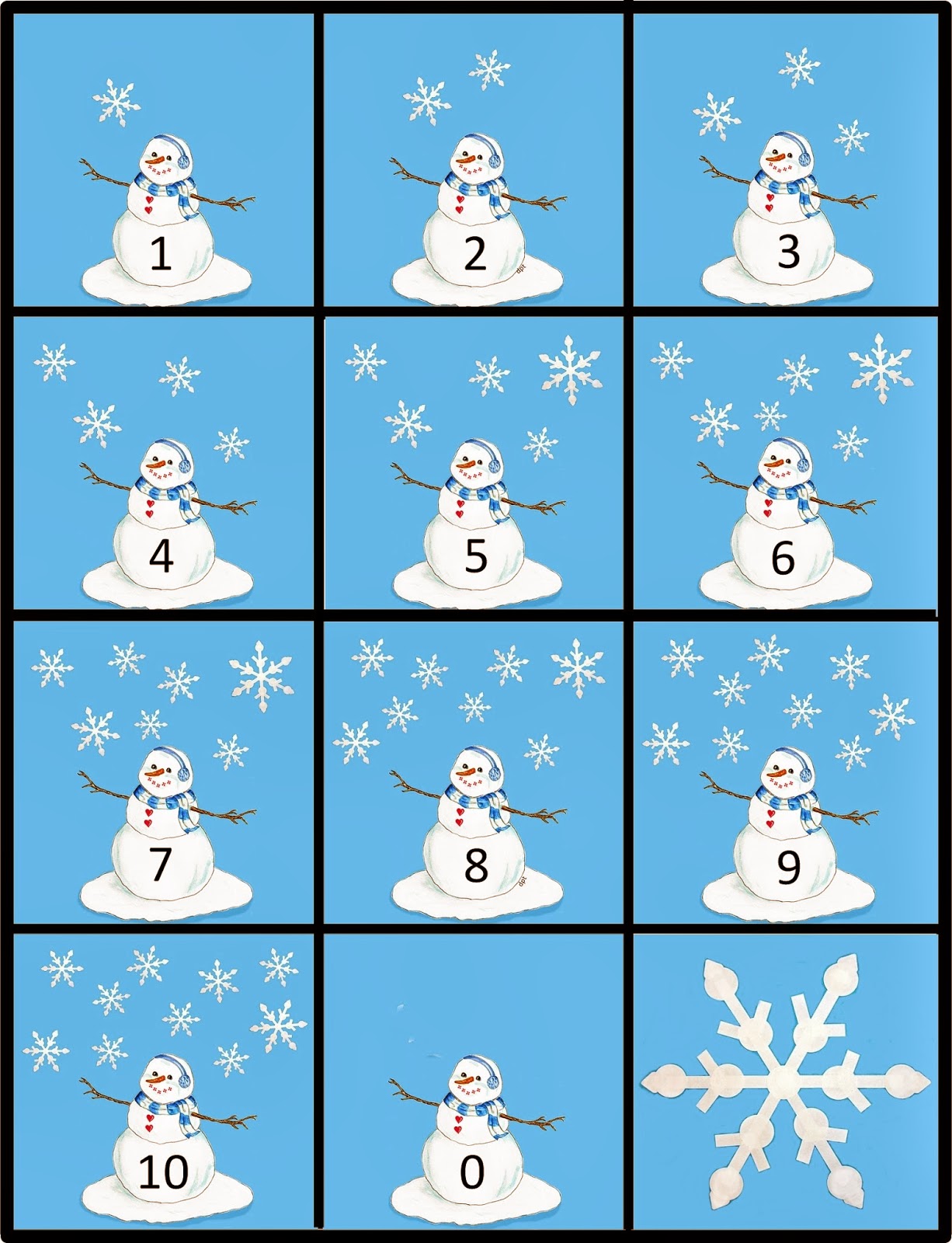 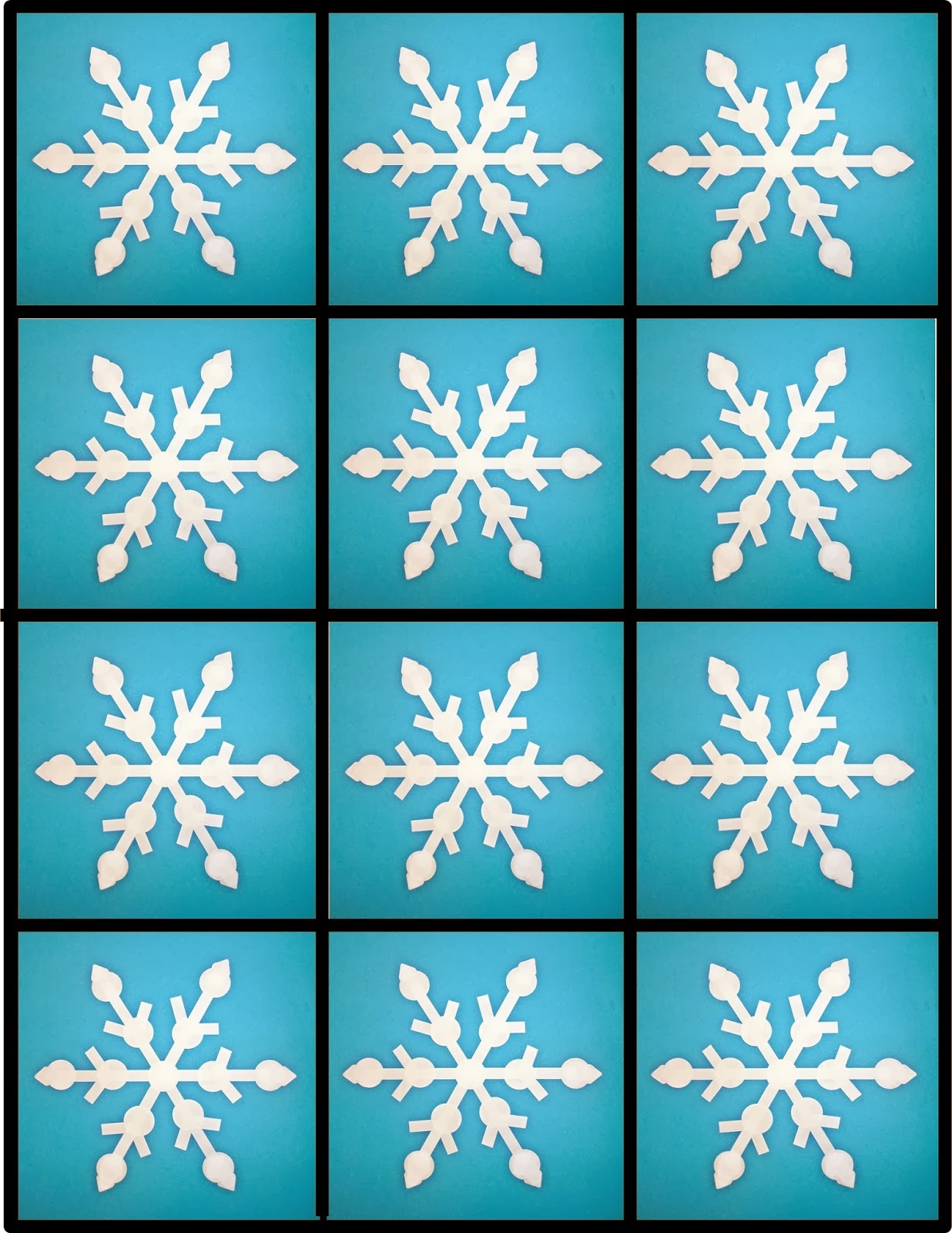 Posted by Rainbows2Snowflakes at 5:42 AM 2 comments:

What is yellow, squishy, easy-to-grasp, and provides an instant smile? A rubber ducky, of course!
For most children, bath time or backyard pool time experiences are enhanced by the simple plastic (not rubber) cartoon version of the famous water fowl. From the ever-familiar Ernie and his tiny rubber ducky to the giant smile maker created by Dutch artist Florentijn Hofman, rubber ducks have a way of creating positive memories.
January 13 is National Rubber Duck Day. Why not celebrate by bringing a dozen or so of these cute creatures into your classroom to create positive educational memories for the little ones in your life?
Below is a list of Rubber Duck-themed Activities to use to celebrate National Rubber Duck Day with the fanfare it deserves:
1. Conduct an internet exploration of the story of what happened to 28,000* rubber ducks in 1992.**
A brief summary of the event:
In 1992, a cargo ship from China was transporting a container with 28,000 plastic bath toys—ducks, frogs, etc, to the United States. The container fell overboard, spilling the plastic animals into the Pacific Ocean. Since that time, the rubber ducks have appeared all across the globe. Many of them, however, continue to be trapped in the North Pacific Gyre, a vortex of water that circulates between western North America and Asia.

*Many online resources state that there were 28,000 ducks. However, upon further research, I have found that ducks were only part of the set of plastic animals that were lost at sea.


**This is a great opportunity to discuss how myths are often generated from facts. Encourage children to establish credibility of the source. For example, one site listed the ducks as originating from Japan. They began their journey in China, not Japan.


2. Using the images provided with this resource or a set of rubber ducks and a world map, practice identifying the continents and countries where the ducks have been spotted. Children can match the international ducks to the region or use the ducks to trace the path the ducks took to reach their destination. List the oceans that the ducks traversed to get to their final locations.
This is another opportunity to demonstrate the connection between oceans.
3. Conduct an internet search to identify locations where the giant rubber duck created by Florentijn Hofman has been displayed. Mark those locations on a globe or map.


*There are some great videos of this giant duck. Most recently, the giant rubber duck was in Pittsburgh, Pennsylvania.
4. Use the information obtained with the internet search in number 3 to compare the size of the ducks children play with to the giant rubber duck. This activity can be easily modified for different levels. For example, estimate how many small rubber ducks it would take to equal the height of the giant rubber duck. For younger children, provide the estimate and practice rote counting. For older children, measure the ducks and calculate the answer.
5. Give a duck to each of your children. Ask them to track the path the duck takes to run an errand. For example, how many left and right turns does it take to go from home to the grocery store? Instead of listing oceans, list the street names where their duck traveled.


6. Read 10 Little Rubber Ducks by Eric Carle. This book addresses the following concepts:
·        Counting
·        Ordinals
·        Positional words
·        Compass directions
·        Comparing items (living ducks with rubber ducks)
·        Target audience: Pre-K-1
7. Provide each child with a rubber duck to write a story about where that duck could travel.
8. For older children, connect the great rubber duck disaster to environmental awareness. Conduct an internet search to learn of other items that are trapped in the North Pacific Gyre. Create a list of ways to reduce the impact humans make on the world in which we live.
9. Use the rubber ducks or printables to practice math concepts. 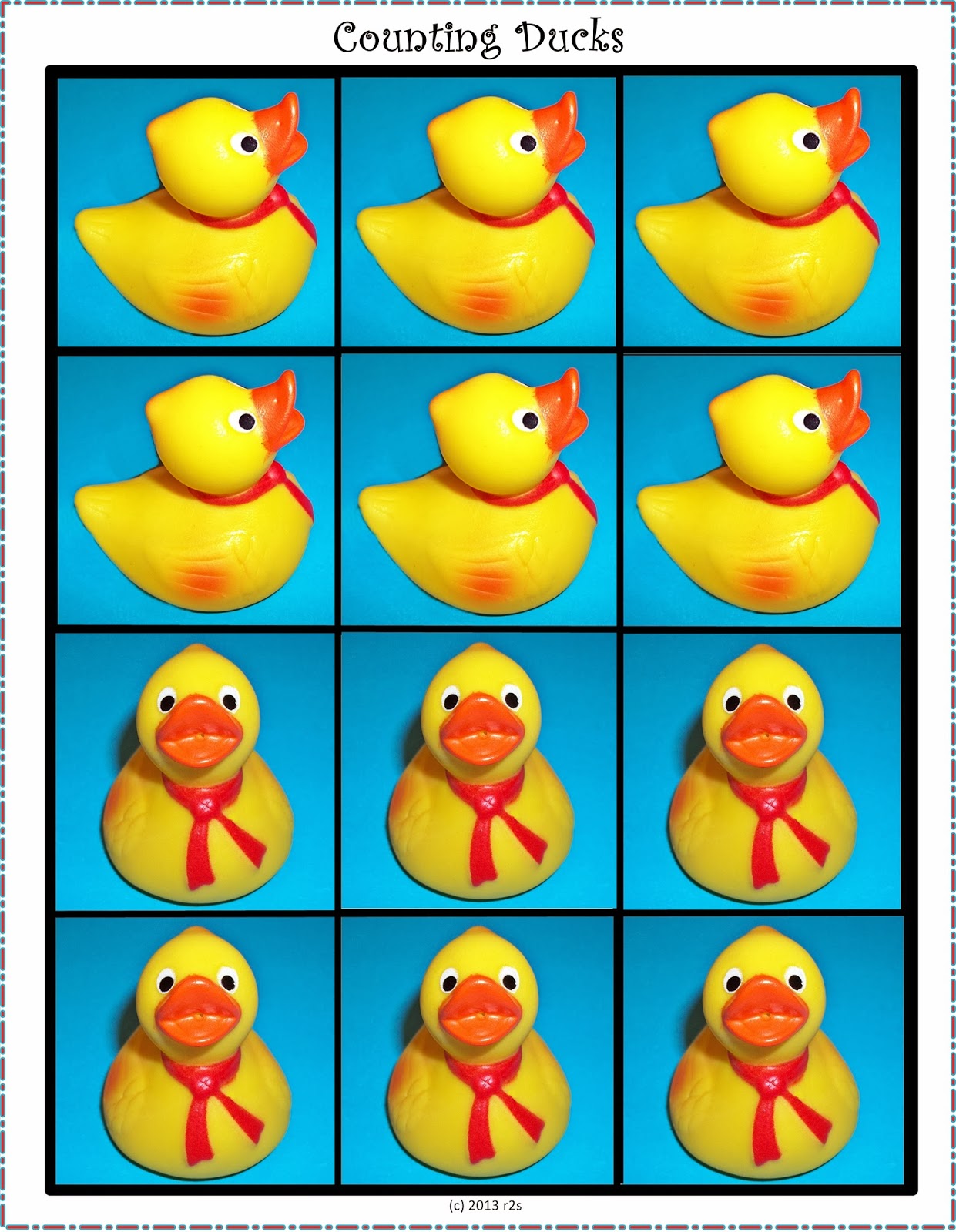 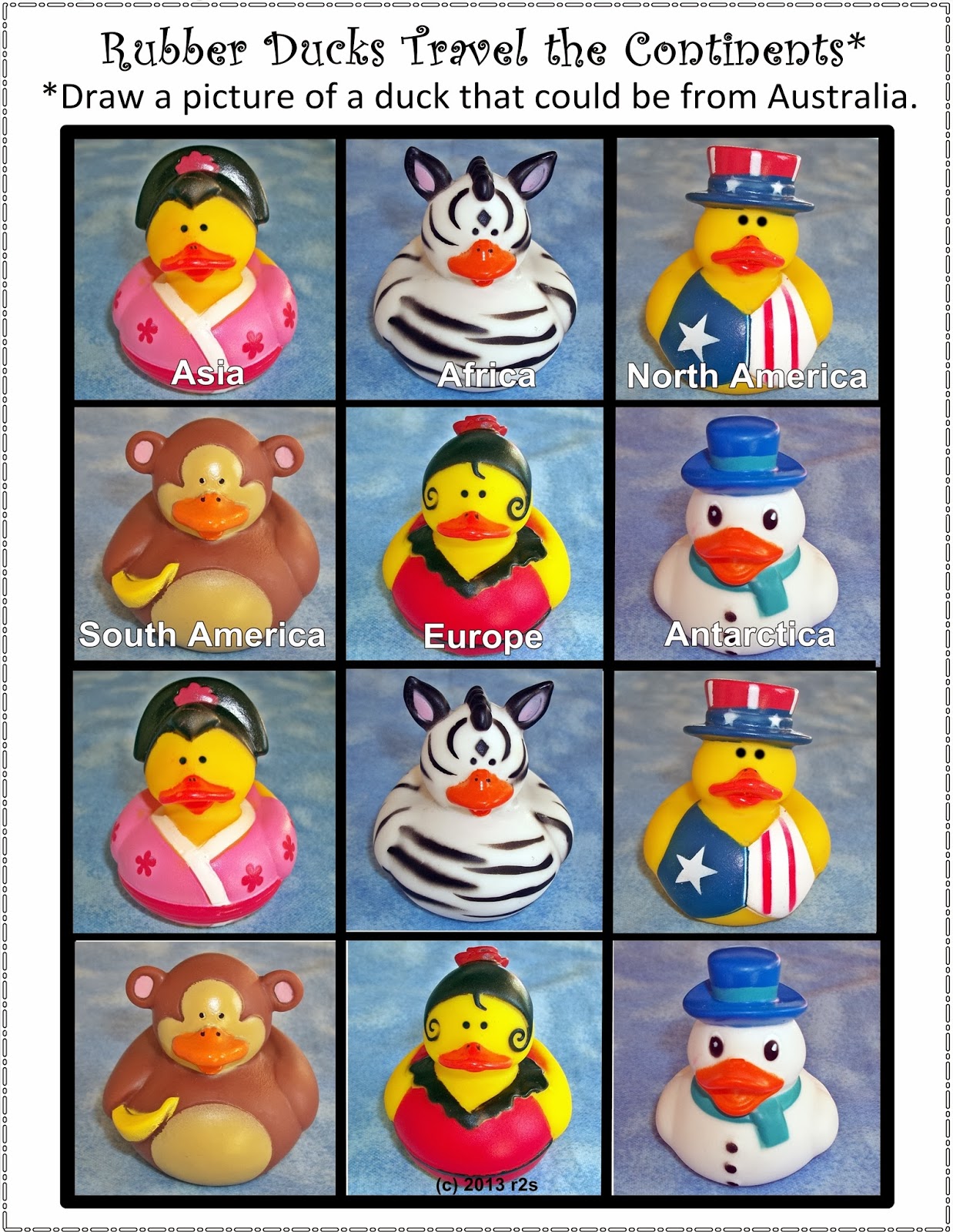 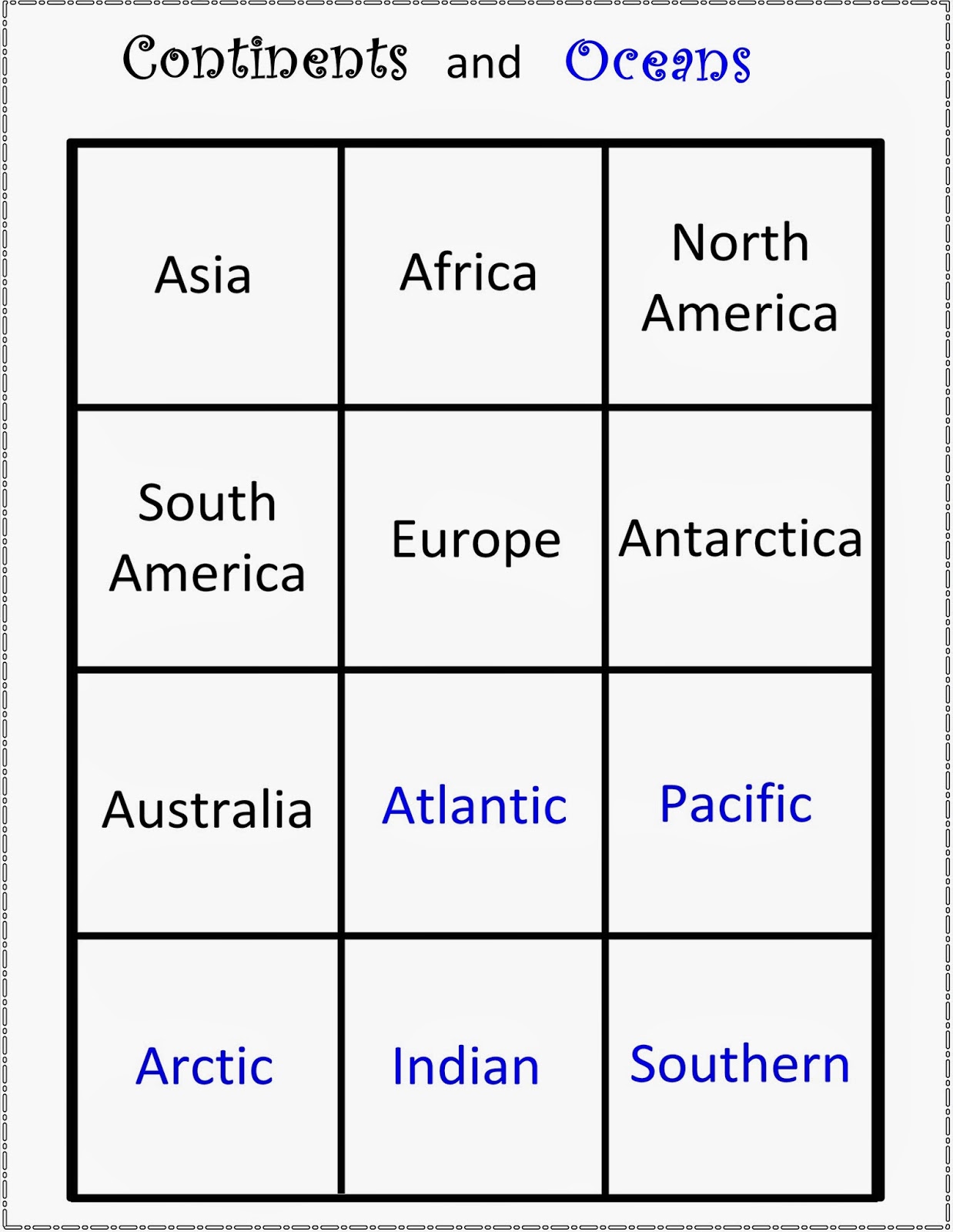 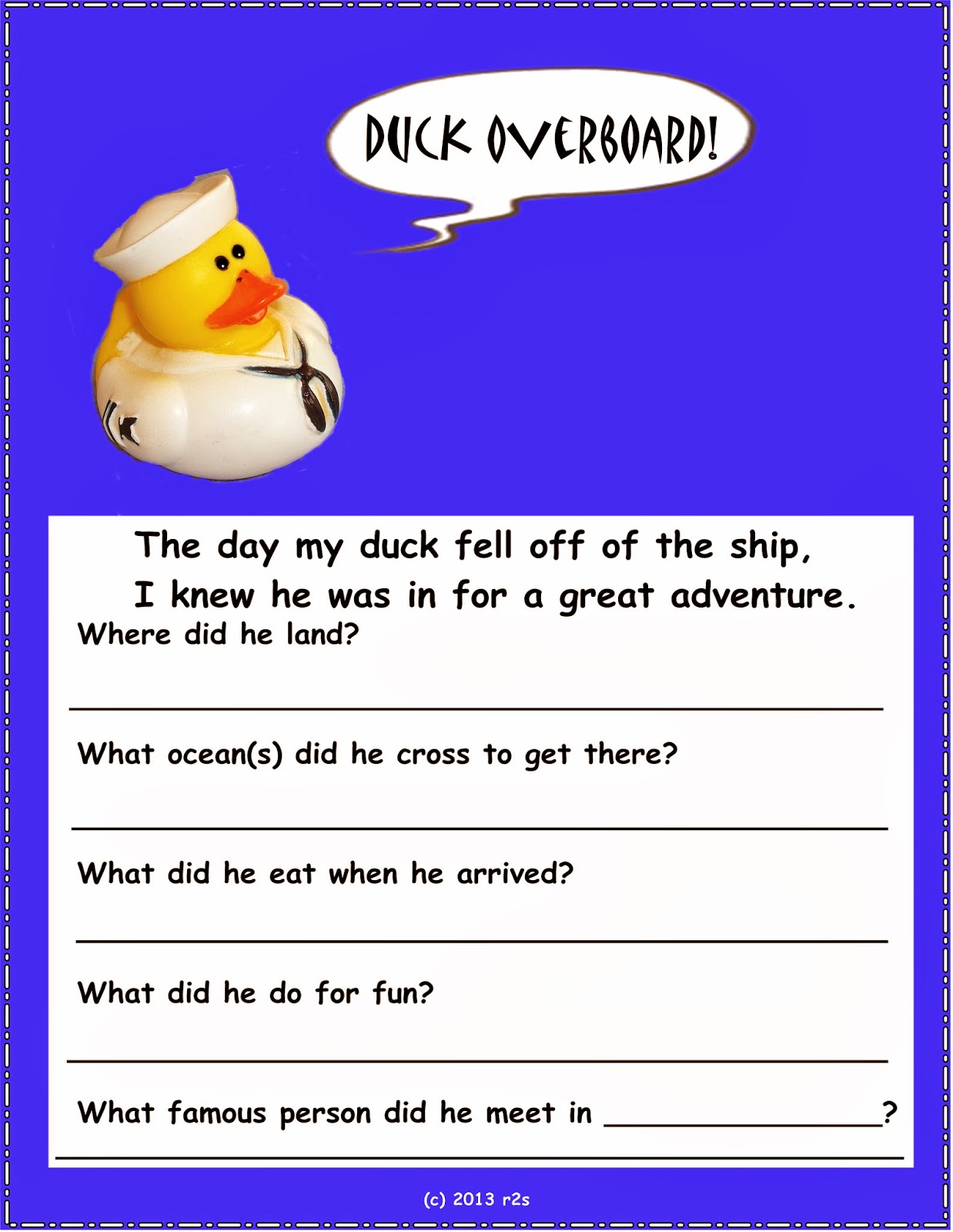 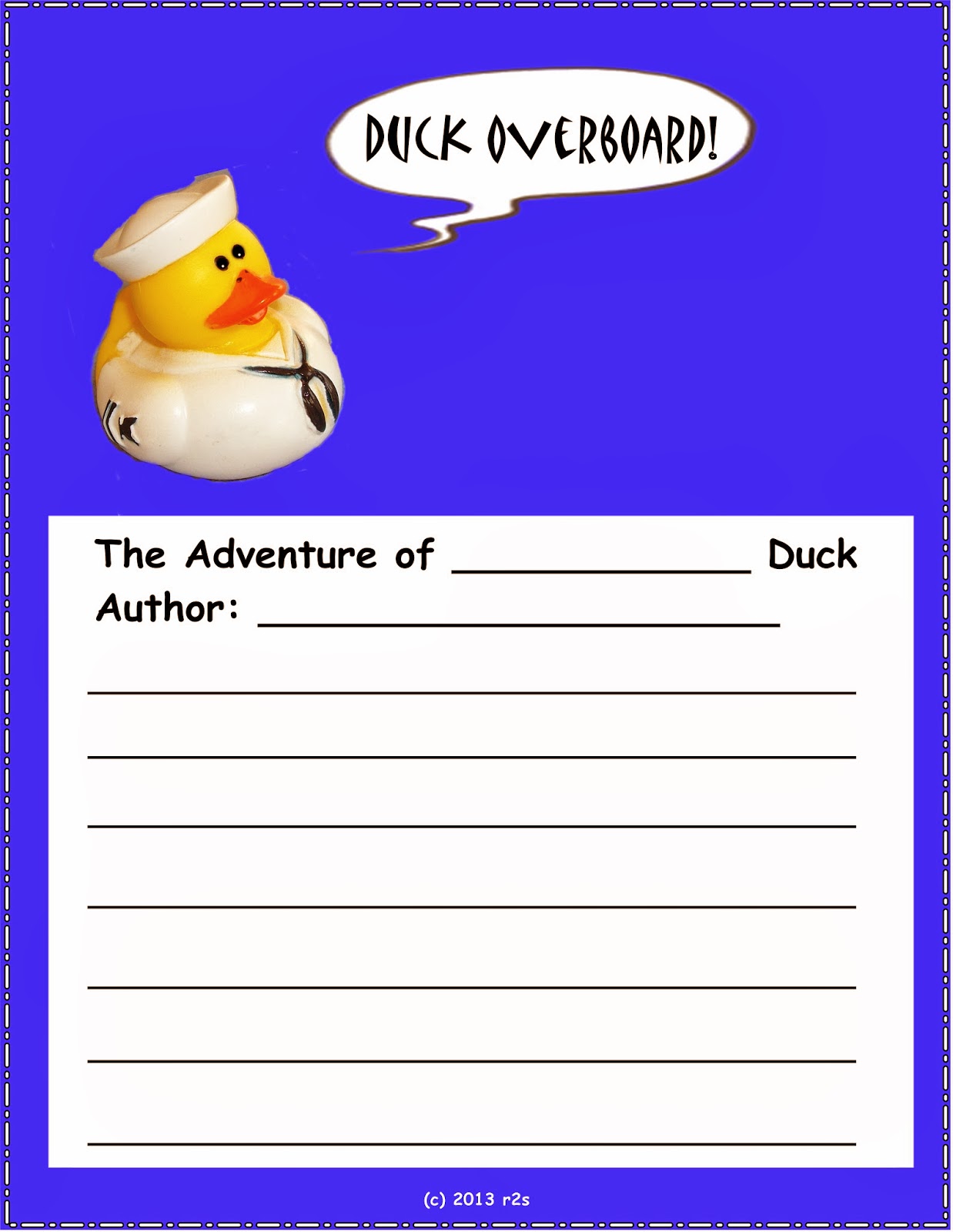 This post was shared on the following sites. Please check them out:

The Cornerstone For Teachers dot Com 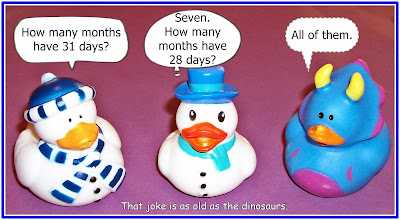 It’s official! The New Year has arrived. Across the country and around the world, January 1st signals the official end of the holiday season and a return to a noses to the grindstone time of year—in the workplace and in the classroom. The start of a new year, fresh with energy, is the perfect time to conduct a mini unit utilizing the new calendar.
Below you will find some of the many ways that a calendar can be used to teach, reinforce, and review essential skills. Many of these suggestions can be easily modified to meet age and ability levels. They can be used as center activities, small group review, or as a homework activity that involves the entire family.
Activities:


1. Begin the unit with a quick review of the months of the year in order. Enlarge and print the monthly calendar to use for this activity


2. Provide each child a copy of the calendar to use for the following activities. 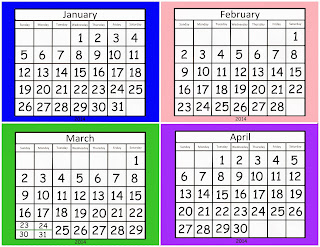 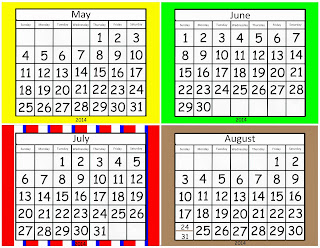 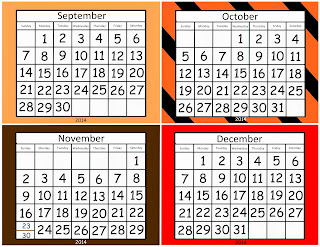 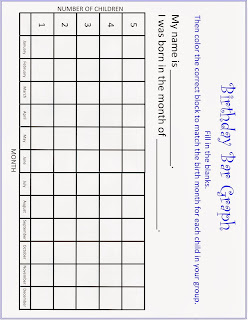 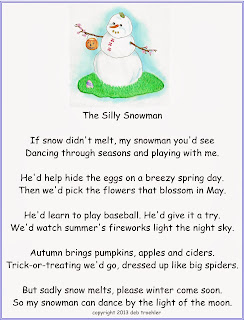 *The calendars are also great additions to the morning warm-up folder for your children. They can be used to mark each day that has passed, identify weekend days, record the daily high/low temperatures, or provide sticker incentives and rewards. The possibilities are endless.
Posted by Rainbows2Snowflakes at 6:54 AM No comments: